(From www.chatdocdacam.info © by Adrian Brown )

An old Grand Father is sadly holding the hand of his little grand daughter, the third generation of agent orange victims

In Vietnamese, there is an old saying "When mature bamboo trees grow old, new bamboo shoots grow up" which implies the circle of life and the expectations of the old people for their children to grow up and finish their unfulfilled dreams.

In Vietnam, children is the source of happiness for old people. The old considers the children both as the console and as the hope for future. An old man will be happy with healthy grand children because he knows that the family tree will keep growing long after his death.

In this photo, the old man bears a sad look to the future because he sees no brighter prospect for the family, and my heart feels pain when I see his white hair and his sad eyes.

HOW DO THEY STRIKE YOU?

(Photo from www.photo.nl Copyright Jan Banning)
Their father Le Huu Dong (57) says: "Nhon (right, 27) and Hoa (14) have the same problem. People call them monsters, but their brains are normal. They can understand, speak and walk." As a soldier in the South-Vietnamese army, Dong was in contact with Agent Orange. A third child with the same syndrome died.
Photo Jan Banning.

They are human being suffered from the vicious chemical named agent orange.

When you see them, let love and compassion be pumped out from your heart like your blood! Let them be seen through your teary eyes.

If you come to Vietnam, let you hug them, and warm them with your love and your compassion!

You may not bring money, bring love!

The legacy of Agent Orange 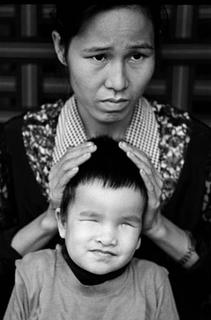 (From www.chatdocdacam.info © by Adrian Brown )

(This article is quoted from the BBC)

Thirty years after hostilities ended between the US and Vietnam, relations remain strained by one of America's most notorious actions, the use of the chemical Agent Orange.
The Vietnamese believe that the powerful weed killer - the use of which was intended to destroy crops and jungle providing cover for the Vietcong - is responsible for massively high instances of genetic defects in areas that were sprayed.
Nguyen Trong Nhan, from the Vietnam Association Of Victims Of Agent Orange and a former president of Vietnamese Red Cross, believes the use of Agent Orange was a "war crime".
He told BBC World Service's One Planet programme that Vietnam's poverty was a direct result of the use of Agent Orange.
"They are the poorest and the most vulnerable people - and that is why Vietnam is a very poor country," he said.
"We help the people who are victims of the Agent Orange and the dioxins, but the capacity of our government is very limited."
Contaminated areas
Campaigners such as Mr Nguyen believe they have been left with little choice but to resort to legal action, and in 2004 took the chemical companies that produced Agent Orange to court in the US.
But last month an American Federal District Judge dismissed the case on the grounds that use of the defoliant did not violate international law at the time. An appeal has been lodged against this decision.
The US sprayed 80m litres of poisonous chemicals during Operation Ranchhand. There were many Agents used, including Pink, Green and White, but Agent Orange was used the most - 45m litres sprayed over a 10th of Vietnam.
It was also used - mostly in secret - over parts of neighbouring Cambodia.


But Agent Orange in particular was laced with dioxins - extremely toxic to humans. Dioxins accumulate in the body to cause cancers. Anyone eating or drinking in contaminated areas then receives an even higher dose.
Spraying stopped in 1971, after more than 6,000 missions and growing public disquiet.
But the ground in many areas of Vietnam remains contaminated by Agent Orange. A number of people in these areas believe they are victims of the chemical.
One woman said the herbicide had caused a skin disease which gave her "great suffering".
"If the US and Vietnamese governments could care for people like me, that would be comforting," she added.
Another man said his legs have "wasted away" as a result of Agent Orange.
"When I realise I have been contaminated with poisonous chemicals, and the US government hasn't done anything to help, I feel very sad, and it makes me cry," he added.
"Now I always get severe headaches. My first child has just died - he had physical deformities. The second one is having headaches like me."
Cancers and disease
Food and supplies are still delivered to victims of Agent Orange. Many were not born when the US sprayed the area - but there is strong evidence the chemicals are still having an effect.
A disproportionately large number of children in the areas affected are born with defects, both mental and physical. Many are highly susceptible to cancers and disease.
And Vietnamese doctors are convinced Agent Orange is to blame.

"This is due to the US sprayings," said Dr Hong Tien Dong, village doctor who has lived in the area all his life.
"Before, in this area, the environment was quite clean.
"Now it has become like this."
In the late 1990s, a Canadian study tested soil, pond water, fish and duck tissue, as well as human blood samples, and found dangerously high levels of dioxin travelling up the food chain to humans.
Dioxin concentrations have been found to be 13 times higher than average in the soil of affected areas, and, in human fat tissue, 20 times as high.
A Japanese study, comparing areas sprayed with those that were not, found children were three times more likely to be born with cleft palates, or extra fingers and toes.
There are eight times as many hernias in such children, and three times as many born with mental disabilities.
In 2001, scientists found that people living in an Agent Orange "hotspot" at Binh-Hoa near Ho Chi Minh City have 200 times the background amount of dioxin in their bloodstreams.
Humanitarian opportunity
America "normalised" relations with Vietnam 10 years ago, and the country has now embraced the free market.
No representative of the US government in Vietnam would talk to One Planet about Agent Orange.
However, in 1984, chemical companies that manufactured the Agent paid $180m into a fund for United States veterans following a lawsuit. They did not, however, admit any wrongdoing.
Meanwhile in 2004 - at the same time Mr Nguyen first brought his lawsuit - a joint-US-Vietnamese project to examine the long-term genetic impact of Agent Orange was cancelled.

Some Americans in Vietnam fear that the legacy of Agent Orange is overshadowing the new friendship between the two countries.
"Many of the other obstacles have been dealt with - trade and exchange and diplomatic relations," said Andrew Wells-Dang, from the Fund For Reconciliation And Development - an American organisation set up in the 1980s with the aim of improving relations between the countries.
He pointed out that the US has provided funding for clearing mines that it dropped on Vietnam during the war.
"We think the US should do the same with Agent Orange," he added.
"It's not going to go away, because it affects a huge number of people in Vietnam. "We would see this as an opportunity for the US to take humanitarian action so that it doesn't become an obstacle between the countries."
# posted by Pathfinder @ 1:42 AM 0 comments