This article is quoted from The Guardian

Nearly 30 years after the Vietnam war, a chemical weapon used by US troops is still exacting a hideous toll on each new generation.

Hong Hanh is falling to pieces. She has been poisoned by the most toxic molecule known to science; it was sprayed during a prolonged military campaign. The contamination persists. No redress has been offered, no compensation. The superpower that spread the toxin has done nothing to combat the medical and environmental catastrophe that is overwhelming her country. This is not northern Iraq, where Saddam Hussein gassed 5,000 Kurds in 1988. Nor the trenches of first world war France. Hong Hanh's story, and that of many more like her, is quietly unfolding in Vietnam today. Her declining half-life is spent unseen, in her home, an unremarkable concrete box in Ho Chi Minh City, filled with photographs, family plaques and yellow enamel stars, a place where the best is made of the worst.

Hong Hanh is both surprising and terrifying. Here is a 19-year-old who lives in a 10-year-old's body. She clatters around with disjointed spidery strides which leave her soaked in sweat. When she cannot stop crying, soothing creams and iodine are rubbed into her back, which is a lunar collage of septic blisters and scabs. "My daughter is dying," her mother says. "My youngest daughter is 11 and she has the same symptoms. What should we do? Their fingers and toes stick together before they drop off. Their hands wear down to stumps. Every day they lose a little more skin. And this is not leprosy. The doctors say it is connected to American chemical weapons we were exposed to during the Vietnam war."

There are an estimated 650,000 like Hong Hanh in Vietnam, suffering from an array of baffling chronic conditions. Another 500,000 have already died. The thread that weaves through all their case histories is defoliants deployed by the US military during the war. Some of the victims are veterans who were doused in these chemicals during the war, others are farmers who lived off land that was sprayed. The second generation are the sons and daughters of war veterans, or children born to parents who lived on contaminated land. Now there is a third generation, the grandchildren of the war and its victims...

GO TO SCHOOL IN BASKETS…. 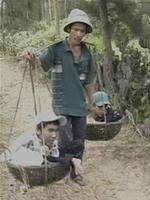 One day in May, the sandy region of Duy Nghia, Duy Xuyen is burning in the heat of the noon. A man tied his two children onto his bicycle and forced it through the sandy road without a shade, their backs were soaked with sweats. A fairy tale in life!

"For me this is much better now. A few years ago, I used to carry them in baskets …" The man is Mr Le Van Nhan, father of two agent orange children named Le Van Anh and Le Van Trang. Leaning himself against the bicycle to wipe out sweats on his face, Nhan said he had carried his sons to school for the past nine years

"During the war, I lived in the area toxicated by the American but I was unaware of the consequences. After the war, I returned to my homeland and get married in 1985. For two years, we had two deformed babies. We took them from hospital to hospital but the doctors could not help, they said that the boys were infected by agent orange" Nhan said.

The two deformed sons were a heavy burden on the shoulder of the young parents. Living from hand to mounth, they tried to bring up the sons with a little hope one day they can find a cure for their children.

When the two boys turned 8, despite their withered hands and legs and their deformed body, they both asked to go to school. Feeling pity for them, Nhan, tearfully, carried his sons to schools. "Those days, I and my wife took turns to carry them to school in baskets. Fortunately, they are both smart and hard working, so they have been studying well for seven years" Nhan said.

When his children reached grade 8, a concrete road was built. The parents decided to buy an old bicycle, and tied their children onto the bicycle to carry them through the 3-kilometre road to school. Now their children have just finished the graduation examination from secondary school, and are preparing for the next entrance exam into high school….

2.
…On the tortous and rocky road in a mountainous area of Tien Son, Tien Phuoc, I found Mr Pham Viet Canh who carried on his back his deformed son Pham Viet Tuong to school. Rain or shine, Canh has carried his son through 3 kilometre rocky road to school for the past 5 years. In return to his father's endeavour, Tuong has always been the distintive pupil of the Primary school Nguyen Ba Ngoc. However, his father is still worried: " Next year, my son will move to secondary school, which is 6 kilometres away from home, he can not stay in a dorm, and I am afraid I can not carry him that far. If only I had a bicycle…"

…Dai Hong village, on a small road skirting a mountain, there was a little girl helping her friend go to school. For the last 6 years, the journey from home to school have been an embody of a fairy friendship in life. The two girls are Tran Thi Thu Dung and Truong Thi Thuong, pupil of class 6/3 in the Secondary School Phu Dong.
Mrs Luong Thi Hue, mom of Thuong , recalled " After giving birth to Thuong, I was so shocked, I got fainted again and again. After that, despite of our poverty, I tried to find a medical treatment for her, but all hospital people were unable to help, they said my daughter was infected by agent orange…"

Thuong, now 16, is only half a metre tall. She can only sit, she can not walk. Without the help of her friend, Dung, Thuong could have dropped class long time ago. Up to now, the little Dung has been carrying Thuong to school for 6 years. Many people of Dong Phuong Village said, at first, they thought that the two girls were beggars because they looked so pitiful. But they now know that the two girls have just been awarded the certificates of merit for their achievement at school…

In many regions of Vietnam, thousands of agent orange children are going to school with the help of parents and friends. Despite their physical disadvantages, they all share the same aspiration to live, to study, and to better themselves.