The determination of an armless boy 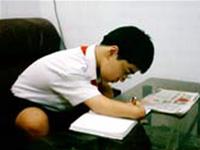 The boy in this picture is Tran Ton Trung Son. His father used to be a soldier fighting in Laos, and his family was from the South Bank of Ben Hai river, an area highly intoxicated by agent orange.

the day Son was born was a very sad day for his family. Son's left hand was abnormally short, and his right arm did not have an elbow. A pitiful baby!

The parents, recognizing the consequences of the war inflicting on their family, tried their best to get rid of poverty and to get ennough money to help their son.

Going to Hochiminh City empty-handed, Son's parents sent him into Hoa Binh Village in Tu Du Hospital, in which Son was cared by the nurses.

With some more spared time, the parents worked as hired labours and apprentices. At night, they had to sleep in the park. With all the money earned, they tried to afforded Son's study.

The parents' endeavors were well-paid. Son came first in the examination into the Secondary School Nguyen Gia Thieu (in Tan Binh District). Later on, he became one of the top 5 students of the Tan Binh district, also the distinctive student in Mathematics and Vietnamese Grammar of the City. Son was awarded the tittle " A Distinctive student who has overcome difficulties" Now, he is still among the best students of the School with an English mark of 9/10, Math 9/10 and Literature 8,5/10.

Beside school works, Son is keen on programing, practicing taekwondo, and reading.

Comments:
This comment has been removed by a blog administrator.